Westfield Friends School is offering an exclusively in-person experience for the 2022-23 school year. We anticipate in-person learning for all grades with no remote at-home learning option for students. Exceptions will be made for students who need to quarantine for COVID-related reasons. Learn More

The World We Seek for Children Begins Here.

While Friends schools are renowned for their outstanding academics, the cornerstone of the Friends educational model is built upon the notion that our students' quality of character – what kind of people they are becoming – is as vital as their intellectual growth. From Preschool through 8th grade, our students grow in knowledge and are filled with the best qualities of mind and spirit: simplicity, peace, integrity, community, equality, and stewardship. Our faculty strives to bring out each student's individuality, working to develop creative thinkers, problem solvers, and humanitarians who will contribute responsive and responsible leadership throughout their lives.

Westfield Friends School has created and maintains an inclusive and equitable community that is safe and welcoming for all. We teach respect, affirmation, and protection of the dignity and worth of each member of our community and the world at large.

An inspiring academic setting and an empowering community. 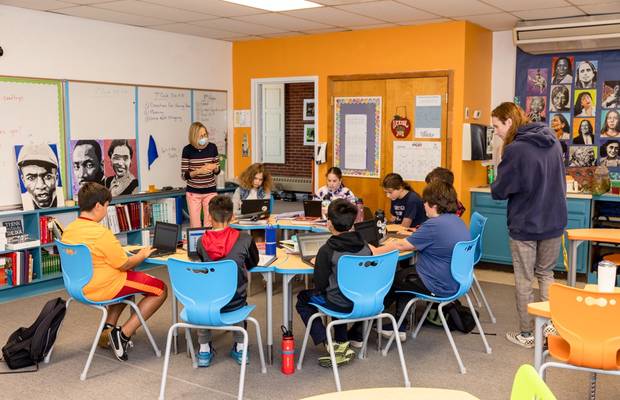 We strive for academic excellence with a social conscience. Students grow in knowledge and are filled with the best qualities of mind and spirit. Our faculty strives to bring out each student's individuality, working to develop creative thinkers, problem solvers, peacemakers, and humanitarians who will contribute compassionate, responsive, and responsible leadership throughout their lives.

Annual Cost
$13,400
Cost is for the most complete schedule offered and may have changed for the current school year. For more information, please contact the school.
Starting Age
This is the earliest age students may enroll in educational preschool programming for the school.
2 years
Pre-K Student-Teacher Ratio
The Student-Teacher Ratio for preschools is reported directly by the school.
6:1
Website
westfieldfriends.org/apps/pages/index.jsp?urec_id=846225&type=d&prec_id=1573305
Schedule Options

Rating 5 out of 5  20 reviews
Selecting a category below will take you to another page
All Categories
Rating 5 out of 5
This school has prepared my daughter for primary school. The school and its staff are exceptional. My daughter was a student of Mrs. Marrazzo's preschool class and she absolutely flourished as a result of Mrs. Marrazzo's teaching. I would highly recommend this school to any of my friends and family. Small class sizes, teaches REAL math, teaches how to be a good person using the tenants of the Quaker religion (while still feeling secular), abundant arts program, yoga offered and field trips - everything I could have asked for! Plus they started "income based tuition" which has made the educational experience more financially accessible to my family.
Start Your Review of Westfield Friends School
Rating 5 out of 5
We recently transitioned our daughter to Westfield and are very pleased with every aspect of the experience and school. The administration, teachers and parents have all been very helpful and caring to ensure a smooth transition. The academics and values are a true differentiator. We are also very pleased with the diversity and inclusive environment. Westfield Friends is a true gem!
Rating 5 out of 5
Westfield Friends provides a stellar learning environment for our son. He is in 4th grade and has been attending WFS since pre-K. In that time he has really flourished not only as a student, but more importantly as a person. The rigorous academic standards, coupled with the emphasis on building character is a true differentiator to other schools. We could not be more pleased with the faculty, teachers, parents, and students at our school!
Read More Reviews