For the 2022-2023 academic year, no on-line learning options will be offered. All classes will be held face-to-face. All boarding students must be fully vaccinated including a Covid-19 booster shot within 6 months prior to arrival for the 2022-2023 academic year. To learn more and apply, visit https://montverde.org/discover-montverde-academy/application-process/. Learn More

Founded in 1912, Montverde Academy inspires students to become leaders with passion for knowledge, global vision and innovation, while developing character in a nurturing, diverse community. At the heart of an MVA experience is something truly transformational, where students achieve at the highest level. Inside and outside of the classroom, students in Pre-K3 through grade 12 develop their talents and abilities through engaging in arts, athletics, school clubs, honor societies, and service organizations.

Our staff, parents and students are part of a close-knit, caring community that emphasizes positive relationships and helps build self-esteem and confidence in our students, where each individual feels like a valued community member.

We enjoy cultural diversity unlike any other school. With 90+ countries represented by students, our international character adds an exciting global perspective to our community and overall educational experience.

Your path to excellence starts here. 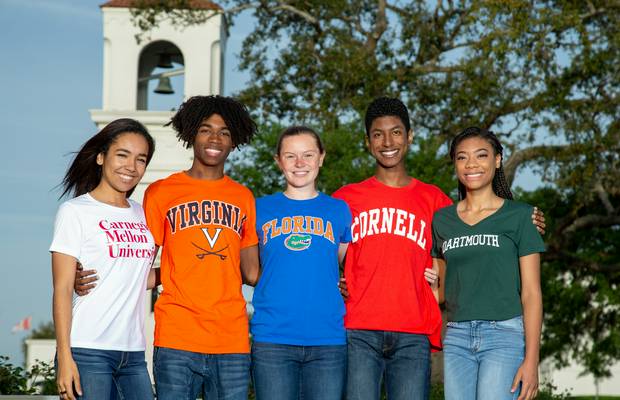 The Distinguished Scholars Program at Montverde Academy will provide opportunities for intellectual rigor and stimulation both in and out of the classroom, throughout high school, for identified and qualified students. Classroom coursework, discussions, field trips and seminars will be designed to support and encourage an enriched intellectual atmosphere.

Students Boarding
The percentage of students who board at the school.
30%
Boarding Days Per Week
The number of days per week boarding is offered.
7-day
Top Countries
The most represented countries at the school, excluding the United States.
Brazil, China, Mexico, Canada, Ghana
International Boarding Students
The percentage of boarding students who are from outside the United States.
80%
Take a Virtual Tour

Annual Cost
$10,920
Cost is for the most complete schedule offered and may have changed for the current school year. For more information, please contact the school.
Starting Age
This is the earliest age students may enroll in educational preschool programming for the school.
3 years
Pre-K Student-Teacher Ratio
The Student-Teacher Ratio for preschools is reported directly by the school.
8:1
Website
montverde.org
Schedule Options

Rating 4.53 out of 5  233 reviews
Selecting a category below will take you to another page
All Categories
Rating 5 out of 5
I have attended MVA for 7 years and I can say without hesitation that I am better for being among such a diverse student body. I’m challenged academically on all fronts. I’m taking nearly all AP courses and excelling on all fronts. It’s a very different environment then the small, closed minded school I attended in elementary. I’ve never been afraid to ask questions or challenge a stance. In fact, my teachers welcome in-depth discussions in all my classes. The only two things I would change is the interaction with college counselors needs to start in Freshman year. All students need help to realize the importance of staying focused throughout their entire academic upper school experience. The second thing I would change is the science departments use of animal dissection. It’s outdated and not recognized by any reputable advanced learning platforms and MVA students could jump leaps and bounds ahead if the school would prioritize this issue.
Start Your Review of Montverde Academy
Rating 4 out of 5
Montverde Academy has a beautiful campus and wonderful facilities! There are excellent sports programs and a lot of school spirit. The fine arts/theater/music programs are amazing with excellent teachers. There are specialty conservatories for instrumental music, voice, as well as theater. There are many varied opportunities with clubs and different honor societies. I especially love the great cultural diversity among students and the programs that celebrate different customs. The school is very serious about college readiness and has multiple AP classes. The school helps prepare the students with testing preparation and the college application process. There is a college-readiness counselor assigned to each student. Volunteer hours are required for each student to graduate.
Rating 5 out of 5
Although Montverde Academy's academics are impressive with IVY League college placement every year, what strikes me is how well-rounded the students are. Theatre and music conservatory students win many accolades and awards each school year. The athletic program has to be the best in the United States, not just for one sport, mind you, but for being so talented in many, many sports. Overall, approximately 50 athletes are playing professionally with the likes of Franciso Lindor for the Cleveland Indians, Ben Simmons of the Philadelphia 76'ers, RJ Barrett for the New York Knicks and Andre Shinyashaki, Rookie of the Year in Major League Soccer. All are Montverde Academy graduates. Girls soccer was number one in the United States last year, Boys Tennis won a national championship two years ago, baseball was number 2 in the United States 2 years ago, the best boys soccer team plays men's national teams and the boys basketball team has won 5 out of the last 8 national championships. A+!
Read More Reviews