All the prestige of an honors college experience without the price tag. On average, tuition and fees at private colleges are four times those of SUNY Geneseo.

With NY State's Excelsior Scholarship, you may be able to attend Geneseo tuition free. Visit us today! 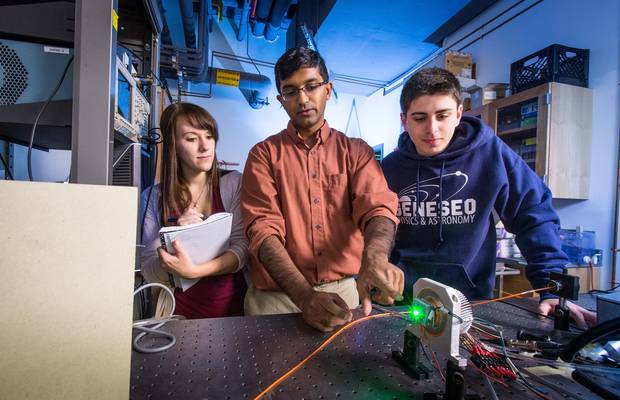 SUNY Geneseo has a reputation for its honors college experience. Small class sizes allow faculty and students to learn together. In fact, many students enjoy research opportunities as early as their first year.

Full-Time Enrollment
4,627 Undergrads
Part-Time Undergrads
202
Undergrads Over 25
2%
Pell Grant
27%
Varsity Athletes
6%
Poll
What one word or phrase best describes the typical student at this school?
Based on 56 responses
More
Read More About the Students

Freshmen Live On-Campus
No data available  —
Take a Virtual Tour
Poll
47%
of students say that Greek life is pretty big. 81 responses
Poll
69%
of students say varsity sporting events are attended, but not a huge part of campus life. 98 responses
Poll
What one word or phrase best describes your school?
Based on 50 responses
More
Read More About Campus Life

Rating 3.6 out of 5  1,021 reviews
Selecting a category below will take you to another page
All Categories
Rating 4 out of 5
Geneseo can be a great 4 year university for anyone if you know how to make the best of it. Although there may not be much to do around campus, the amazing people, greek life, scenery, clubs, and student life can make it that much better. The academics can be quite challenging, regardless of your major, yet you can learn to appreciate the fact that most of the professors just want to push you and make you do your best. It is a fun time!
Start Your Review of SUNY Geneseo
Rating 4 out of 5
What originally interested me about SUNY Geneseo was the beauty of the Campus and surrounding area. The landscape is incredible overlooking the valley and the old brick architecture of the campus buildings is stunning during any season. Geneseo also has an amazing academic reputation and is often referred to as the "ivy league of SUNY schools." Geneseo exceeded my expectations academically. The professors were engaging and truly cared about the success of their students. The courses were rigorous and prepared me extremely well for further education. The most amazing part is that the school is very affordable and accommodating. The opportunity to participate in the SUNY excelsior scholarship allowed me to get an amazing education without going bankrupt. In addition, Geneseo enrolls a very diverse group of student to help enrich campus life and activities. They offer a wide variety of sports, group activities, and organizations to accommodate anyone and everyone.
Rating 4 out of 5
Personally, I love it at Geneseo. I like the small-town feel, the campus is beautiful, and I've enjoyed most of the classes that I've taken so far. There are challenging ones and easy ones, like you're going to get anywhere. I like nearly all of my professors. The two dorms I have lived in have been fine, your average college dorms. In my opinion, the food is pretty good, better than other colleges I think (but I do know that some vegans/vegetarians have issues finding good options). Overall, I can't wait for the next 2 years here!
Read More Reviews