Prospective students are welcome to visit on campus in Annapolis or Santa Fe, or virtually from your home. On campus visitors can tour with a current student and observe a class. Masks are optional on campus. Virtual visitors can explore our virtual tour, one-on-one conversations with admissions staff and students, social media, and more. We look forward to meeting you! Learn More

We are often called “the most contrarian college in America.” Or “the most rigorous college in America.” Or “the most intellectual college in America.” No matter how you define us, St. John’s College is unlike any other. Our students share a common curriculum, reading and discussing 200 of the greatest books in history. You learn directly from Plato, Austen, Einstein, Woolf, and Du Bois, to name a few. Instead of lectures and majors, classes are discussion-based exploring philosophy, literature, science, math, politics, and more. With a 7:1 student-to-faculty ratio, the college ranks #5 for best classroom experience and #9 for best undergraduate teaching. Our community has 1000 students on two campuses in Annapolis, Maryland, and Santa Fe, New Mexico. On the Santa Fe campus, in the Rocky Mountains, Johnnies embrace stunning views and rich cultural diversity while reading great books on the placita, hiking mountains, sculpting pottery, or socializing in the student-run coffee shop. 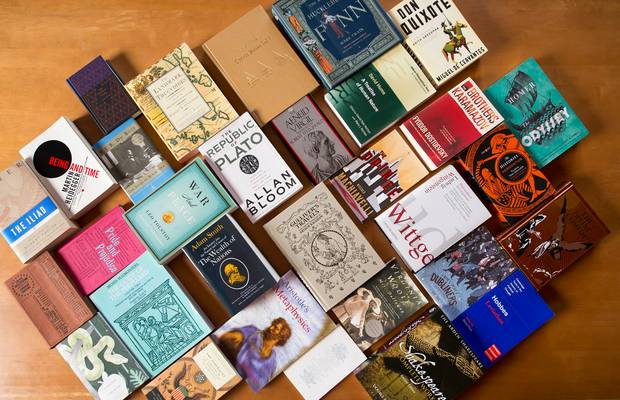 The Great Books Program at St. John’s defies the conventional. No textbooks. Students read original writings of Plato, Shakespeare, Austen, Einstein, and Du Bois (to name a few). No majors. Students discover the connections between literature, science, philosophy, history, and more in a shared, common curriculum. No lectures. Every class is a discussion of great books with 20 students or fewer.

Full-Time Enrollment
355 Undergrads
Part-Time Undergrads
12
Undergrads Over 25
8%
Pell Grant
19%
Varsity Athletes
No data available  —
Poll
What one word or phrase best describes the typical student at this school?
Read More About the Students

More opinions are needed to display this poll.  Take our survey

Rating 3.82 out of 5  60 reviews
Selecting a category below will take you to another page
All Categories
Rating 5 out of 5
St. John's is an excellent college--provided that it is the right fit for you!

Rankings for SJC tend to be lower because the school is not for everyone and many people find that out later on and leave. But for those who stick around, it is incredibly rewarding. Students who love to read and discuss will thrive. The Program helps you develop invaluable soft skills and challenges you to think deeper at every step: there is no point at which a student will be allowed to remain complacent in their pre-existing world views. I have seen my critical thinking, level of comprehension, and communication skills drastically improve. This is largely due to consistent exposure to difficult material and constructive criticism from tutors, especially during Don Rags. However, you will only get as much out of the Program as you put in. Students are responsible for their own education here, and dispassionate students will quickly become disillusioned.
Start Your Review of St. John's College - Santa Fe
Rating 5 out of 5
Such an incredible community and program. A tight-knit group where you socialize with students of all four years and know all your tutors (we call our professors "tutors") really well. As a student, you are given a lot of responsibility... this isn't attending lectures and taking quizzes. Instead, we read and discuss source texts together. Instead of reading secondary material and buying textbooks, the program takes students through the history of human thought--in philosophy, math, science, literature, history. This school has shaped me, surrounded me with brilliant and dedicated peers, expanded my horizons, challenged me... I just cannot express enough gratitude for St. John's. Truly a formative place.
Rating 5 out of 5
St. John's is unflinchingly committed to a deeply communal and human, yet uniquely rigorous, exploration of ideas and narratives. Beyond the books themselves and the classroom experience, I've learned from my peers in ways I could never have imagined. However, the school has work to do in terms of incorporating more diverse voices to the curriculum that better represent the true gamut of western thought. It also lacks certain resources that other larger colleges have in terms of facilities and funding for extra-curricular activities. This being said, the academic and social experience that you get at St. John's is well worth these sacrifices. Take a tour to get a better understanding of what makes this school worthwhile.
Read More Reviews