Our mission: helping you find yours.

At Saint Mary’s, we believe in learning from doing. With practical, hands-on learning, you’ll be prepared for life after college. Our expertise in business, education, and health and human services means you’ll find a major that delves into your passions and drives your purpose.

Here, you can be yourself and belong to something bigger. Surround yourself with unrivaled nature and recreation, good people, and lots to do — on campus and around Winona.

We believe that an impactful, affordable education should be available to everyone. That's why 99% of our students receive some sort of financial aid. It’s also why 92% of our graduates are employed, enrolled in graduate school, enlisted in the military, or performing volunteer work within a year of graduation.

All we do at Saint Mary’s is because of you. You’ll arrive wanting to make a difference, and through a highly-personal and supportive educational experience, you’ll leave knowing how. 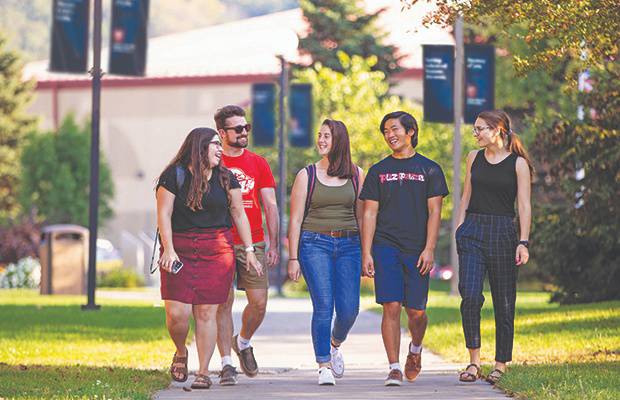 Saint Mary’s offers a direct path to pursue a career as a Physician Assistant (PA) and an opportunity to work with the leading hospital in the nation. You'll first study on the Winona Campus and then learn from Mayo Clinic School of Health Services faculty on our Rochester Campus. Here, you’ll engage in clinical learning experiences at Mayo Clinic and throughout Mayo Clinic Health System.

Full-Time Enrollment
1,052 Undergrads
Part-Time Undergrads
277
Undergrads Over 25
5%
Pell Grant
27%
Varsity Athletes
38%
Poll
What one word or phrase best describes the typical student at this school?
Based on 35 responses
More
Read More About the Students

Rating 3.68 out of 5  548 reviews
Selecting a category below will take you to another page
All Categories
Rating 5 out of 5
Saint Mary’s has such wonderful professors that are extremely helpful and accessible. Not only do they help students understand class information. They provided helpful interview tips and advice and even quiet spaces with good wifi and professional backdrops for interviews. Little things like these are not required from professors, yet our Saint Mary’s staff truly does the little things to go above and beyond.

Campus life is wonderful. Living in the beautiful bluffs of Winona, Minnesota is really something special. Our university is tucked up in a little corner of Winona, it provides me comfort and safety not being in the middle of a downtown area. Our campus life offers new learning buildings, workout facilities, and up-to-date residence halls. When you are ready to step off campus Winona has many different restaurants, look-outs, outdoor activities, and stores to keep you busy!
Start Your Review of Saint Mary's University of Minnesota
Rating 5 out of 5
I am a senior and particpate in on campus jobs, clubs, Greek life and the many on campus activities! My overall expirence with Saint Mary's has been very positive! The faculty have always been very supportive of my efforts, and encouraging to students, often coming to support them at thier different events. The large amount of on campus events and club opportunities means that there is ways something to do, and the variety of events is meant to cater to many different students needs! I currently have two on campus jobs and the teams I work with have so many people from so many backgrounds and abilities, there seems to be a lot of opportunity for real life expirence in potential future careers.

Additionally, the campus itself is beautiful- year round, and always kept up very well. I can tell that the maintenance team cares a lot about the campus because there are always beautiful flowers nicely upkept and facilities are always at the cleanest and best they could be.
Rating 5 out of 5
Everyone values different things for what makes a good school good, but hopefully I can highlight what I've found to be amazing qualities to me. First off flexibility is a huge plus with this school, you can choose to take fully online or in person classes. This has helped me with work-life balence a ton and couldnt imagine my enrollment without it! Secondly, they offer an amazing gen ed program where you can take classes with a 3rd party institution at your own pace and at a third of the normal price for credits. Lastly, their services all have reasonable support and contact time for any issues or inquiries you may have while attending. I personally can attend that their student services has helped me land an internship! I wish I could give feedback for the on campus experience, but I will say that online is more than good option!
Read More Reviews